The Impact of Digital Twins on Smart Buildings

The term smart building has always seemed a little odd to me. How can “a structure with a roof and walls,” the dictionary definition of a building made of steel and concrete, be smart? Surely, the word brainless, an antonym for smart, would be a better word to describe such structures!

In 1883, Warren Johnson, a Wisconsin teacher and later founder of Johnson Controls, patented an invention where a thermostat rang a bell when the temperature in a building was low, informing janitors to shovel coal into a furnace to increase the building temperature. A hundred years later, electronics took the reins with the introduction of Direct Digital Controls (DDCs). More recently, the mighty microprocessor and digital networking have taken charge in regard to the control of comfort in buildings.

The reality is that smart buildings have been focused on the comfort, safety, and after COVID-19, the health of the humans in buildings, not the building itself. While this may sound innocuous, the idea explains why the comfort of buildings has been the task to automate and control. Thus, the term smart is typically used to mean a more intelligent way to automate the control systems for the benefit of humans. This is akin to treating the symptoms of an illness rather than focus on its root cause.

What has been left to the side is the act of making the building itself truly smart across the entirety of its lifecycle, from design, construction, operation, maintenance, and occupation. For years, many in the smart building industry have been trying to address this challenge on the premise that if the building itself is smart, meaning that a well-organized and consistent set of information exists about the building which is cognizant of its design intent, has a rich history of why it was built, and a history of operational data, then with modern digital technology, buildings can truly be smart in order to perform more efficiently and adapt to unanticipated circumstances. This is far beyond just keeping the environment inside the building comfortable. 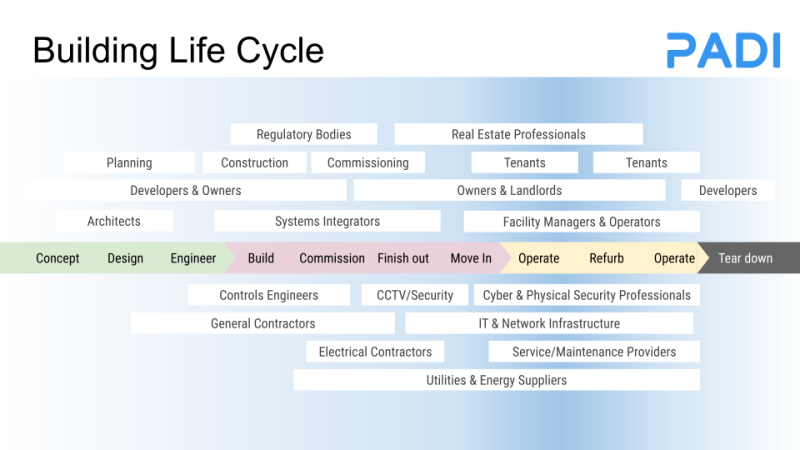 With the plethora of technology available, why has the field of smart buildings not broadened to encompass the full lifecycle mentioned above? Why has building automation and control remained mostly a comfort management system much more aligned with the boiler room than the board room’s business need to facilitate commerce?

To uncover the root cause of these questions, we need to know that, while a building is physically one of the most permanent entities in our daily lives, the people, industries, organizations, and economic drivers for a building are anything but harmonious. The responsibility of a specific building is handed from one entity to another throughout its life.

A building’s life typically begins as a vacant lot, owned by an individual or organization and governed by the relevant jurisdiction with its objectives and legal constraints. As the owner makes a decision to turn the lot into a building, they have financial objectives, either for their own use or in hopes that they can lease or sell the building once it is built. The design phase of a building involves architects and engineers that have a specific task to design the building. Once complete, the design is handed to contractors who start to build the building according to the design and economic specifications. Due to the fact that buildings are complex structures, there are dozens of different trades involved, each with their own concerns. Once built, the building may be sold, change hands, leased, or otherwise occupied by an entity who has their own requirements and objectives. Often this occupation becomes a cycle with refurbishments, during which time the building is operated and maintained by several organizations one after another, each with their individual concerns, and this process can go on for decades!

Because buildings are inherently large, each of the phases above involves significant amounts of money, expectations, risk, and returns. In the information era, each phase also involves significant amounts of data, including financial, engineering, and operational. Unfortunately, such information about the building during each phase is not retained, nor used, by anyone other than those directly involved in the phase of the building.

When an entity buys or leases a property, the essential transaction is when they “get the keys to the door.” There is typically no data being handed over regarding the information of the design, engineering drawings, construction, and history of past performance. Instead, the new owner is given the keys so that they can enter and use the building, which starts another isolated phase.

You can compare this process to buying a business, for example, a retail establishment. In this case, the buyer is likely to be given a book of accounts, spreadsheet(s) of budgets, lists of customers and vendors, personnel performance, and much more. Without such data, it would be hard for the buyer to actualize the expected return from their acquisition.

There is very little, if any, motivation for all stakeholders involved with the phases of a building’s lifetime to volunteer information that would be useful for the follow-on phase of the building. This is because there is no expectation to provide information and no agreed-upon mechanism to do so. So, each phase starts and ends with a transaction of handing over the keys.

Digital Twin is the first, and only, mechanism that has been created that could change these transactions as well as stakeholder behavior.

As industries start to view the Digital Twin as a consistent category of information equivalent to what a book of accounts is to a business, it will become the natural way for professionals to manage the phase of a building they are involved in. The Digital Twin will also allow professionals to make building information available to others, such as the acquirer or lessee of the building.

Similar to a spreadsheet, a Digital Twin of physical assets allow users to see the information about the asset. Digital Twins also give the ability to model future behavior and anticipate how a building will react to changes; with such predictions being based on design intent and past history of gathered information. Furthermore, with AI, this modeling can happen continuously, thus making the modeling and actions autonomous in its behavior.

To achieve this automation, information in Digital Twins has to be present with the building from the initial intent of the building, through design, construction, commissioning, and multiple cycles of occupation. Digital Twin information must also be in a form that can be reused for different and unexpected purposes. Lastly, the information contained in the Digital Twin must be easily accessible and compatible between systems. The implementation of a Digital Twin will also need stringent controls in relation to access, privacy, and security that are critical to information flow of the building.

For buildings, the Digital Twin is a new way to look at a building by focusing on the information associated throughout its lifecycle. If the concept of a Digital Twin is understood and widely adopted, will we actually have buildings that can be defined as smart.

Posted at 5:07 am in Building and Construction,Definition,Infrastructure,Strategy,Web/Tech, | Permalink